We’ve been busy. We bought a foreclosure. The housing market here was/is completely crazy. We were one of ten bidders! It was honestly our last shot at buying a house before  moving and having to find temporary housing. Obviously God wanted us to have this house!

This house has a lot of things we love, but also plenty we don’t. It’s not our dream home, and we know it is not our forever home. But here are some things I do like about it;

Some things I’m not so crazy about;

We had plans for when we moved in to paint the kitchen cabinets, and work on the basement which had been finished, but was not in good shape now. Instead, we came in and completely tore the kitchen out. The short version is we realized the cabinets weren’t in very good shape and we hated the linoleum floors (in the kitchen and dining). We debated tearing it all out, but decided it wasn’t in our budget right now. Then Matt moved the nasty oven and saw wood floors below! We were so excited! So we decided to go for it and tear it all out, including flooring. We learned it was pine subflooring in perfect shape. After some research decided we would finish it. Then someone brought up asbestos. And everything changed. The black paper covering the wood we are almost certain was asbestos. We decided to try to remove it by laying wet towels down and scraping (thanks again to quick research). It worked great at first. But then became terrible. It was awful, backbending labor. I did it for three nights. We realized we were going to just have to paint it at some point due to not being able to get all of it off and sanding would release the asbestos. Then we realized it wasn’t working and we were going to need new flooring. We decided to just put in affordable pine and paint it. It won’t be a long term fix, but since we didn’t budget for a whole new floor and we wanted wood, we decided it would do. Also, this took so much longer than planned/expected! So many times one of us would say “Oh we can probably do this tonight and be done.” and it would always end up being longer. We went completely kitchen-less for a solid three weeks. Did you know that freezer meals can actually be pretty tasty? Well, we didn’t either four weeks ago!

Here is the kitchen when we moved in.

Here is the asbestos (or what we are presuming is asbestos). Oh and we had to pull up all the staples…one…by….one…. 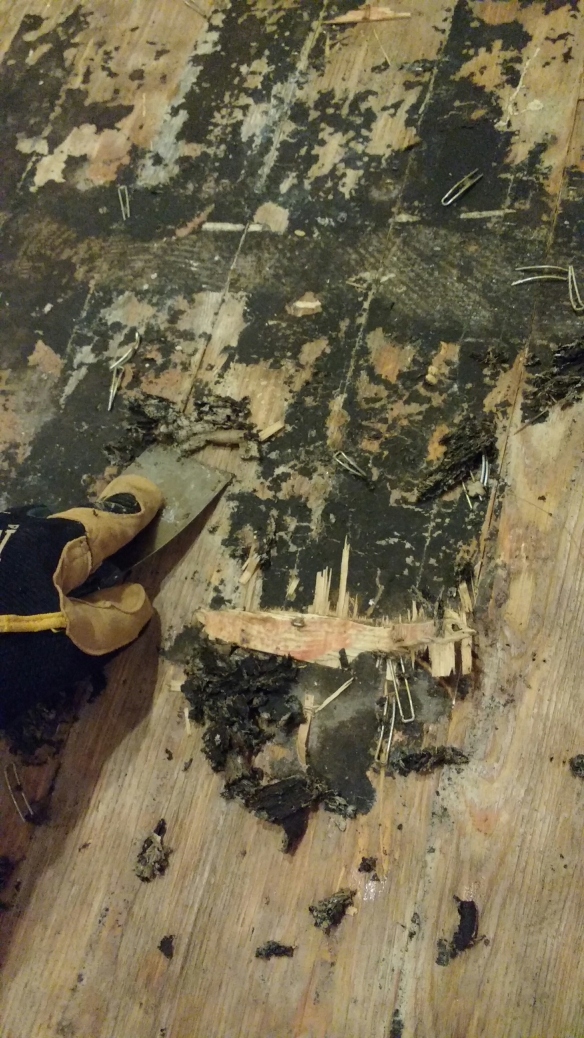 This is the new wood floor over the subflooring after we gave up on it. We planned to paint it, but when we saw it put in like this, we actually really liked it and thought about staining it. But for multiple reasons we decided to stick with painting. 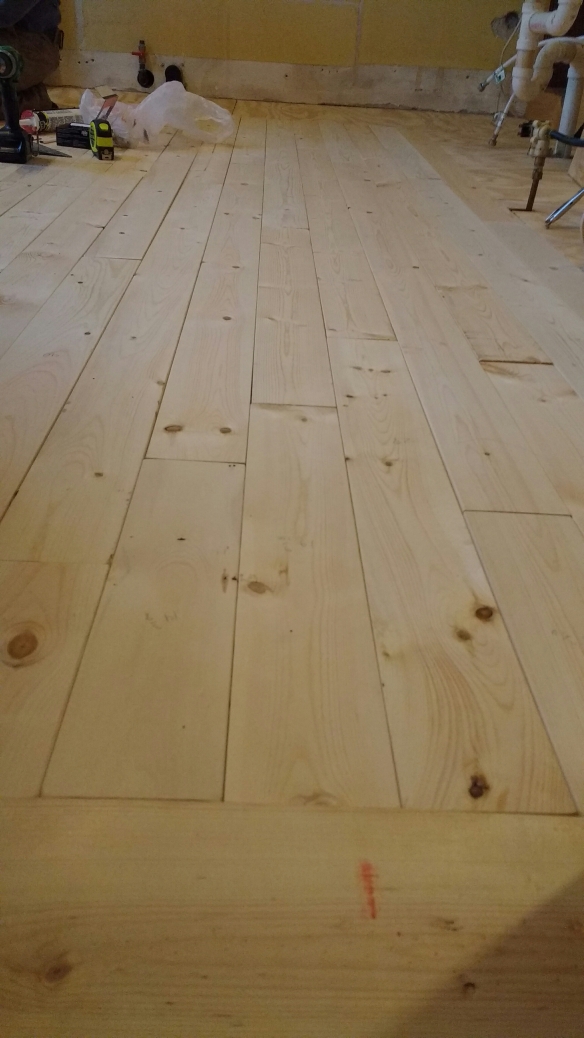 This is what it looks like after being painted! Well after being screwed in, puttied, sanded, puttied again, sanded again, and then painted! And we finally have a range! We are still trying to decide on a fridge (we’ve been searching for a month so open to suggestions) so that tiny one is all we have. Yes, we are going grocery shopping a lot. Matt is planning on building cabinets himself so he set this up in order for us to have a functioning kitchen while he works on it. It’s going to be a long road ahead…but at the end, it’ll be worth it. Or at least that’s what we’re telling ourselves.